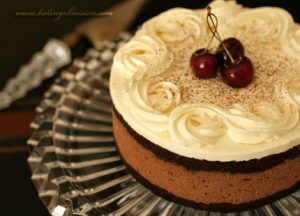 This torta is an adaptation of Lidia Bastianich’s recipe. Although, the only thing almost unchanged was the filling. It seemed like a shame to use canned cherries when the fresh ones are in season. I soaked the fresh cherries in grappa, which is not the cheapest drink here, but feel free to substitute brandy instead; it will still produce a great result. The recipe for the cake layers is Alice Medrich’s wonderful chocolate génoise – light, moist and flavorful. The filling is lightly set creamy chocolate zabaione, with recognizable Marsala taste and undetectable gelatin presence.

We all loved the cake. And what’s not to love?

For the chocolate génoise:

Position an oven rack in the lower third of the oven and preheat the oven to 350F. Butter and dust with flour an 8-inch round cake pan. Line the bottom of the pan with parchment paper circle, butter the parchment.

In a small saucepan, or in a microwave-safe cup in a microwave, heat the butter, without stirring, until it is melted and hot. Spoon off and discard the foam from the surface. Transfer 3 tbsp of the clear yellow butter to a medium heatproof bowl leaving the watery liquid behind. Add the vanilla to the bowl and set aside.

Sift the flour and cocoa together three times; return to the sifter and set aside.

In a bowl of your electric mixer, using a whisk, combine the eggs and sugar thoroughly. Place the bowl in a wide skillet of barely simmering water. Whisking constantly, heat the eggs to lukewarm (about 105F). Remove the bowl from the pan; leave the skillet on the stove but turn off the heat. With an electric mixer, beat the egg mixture at high speed until it has cooled, tripled in volume, and resembles softly whipped cream, about 5 minutes in a heavy-duty mixer or longer with a less powerful mixer.

Meanwhile, set the bowl of butter and vanilla in the skillet of hot water, with the burner off, to keep it warm.

Sift about one-third of the flour and cocoa over the whipped eggs. Use a rubber spatula to fold in the mixture-quickly but gently-until combined. Fold in half the remaining flour and cocoa, then fold in the rest. Remove the warm butter mixture from the skillet. Scoop about 1 cup of the batter into the bowl with the butter and fold together until completely combined. Use the large rubber spatula to fold the butter mixture completely into the remaining batter. Turn the batter into the prepared pan and tilt to level.

Bake until the cake begins to shrink slightly around the edges and the top springs back when pressed with your finger, about 40-45 minutes. Cool the cake completely in the pan on a rack.

To unmold, run a small knife or spatula around the inner edges of the pan. Invert it onto a rack and remove the parchment liner. Turn the cake right side up. The génoise can be wrapped and refrigerated for up to 2 days, or frozen for up to 3 months.

Make the filling, assemble the cake:

At least a night before assembling the torta, and up to a week, prepare the cherries. Combine the sugar, grappa (or brandy), water and vanilla bean in a medium saucepan and bring to a simmer over medium heat. Add the cherries. Reduce the heat to low and cook for 3 minutes, stirring frequently. Remove the pan from the heat, stir in the vanilla extract. Cover the pan and let the cherries steep for 1 hour. Cool to room temperature. The cherries can be refrigerated for up to 1 week, tightly covered. When ready to use, drain the cherries over a bowl reserving the soaking liquid for saturating the génoise layers.

Cut the génoise horizontally into two equal layers. Set one layer, cut side up into an 8-inch springform pan or a cake ring. Brush the génoise layer with ¼ cup of the reserved liquid. Arrange the drained cherries in concentric circles over the soaked génoise layer. Set aside while making the zabaione filling.

Bring 1 inch of water to a simmer in a wide skillet. Turn the burner off (if your stove is electric, remove the skillet from the burner) and wait for 30 seconds. Meanwhile, place the chocolate in a medium heatproof bowl. Set the bowl of chocolate in the hot water. Stir constantly until the chocolate is melted and smooth. Set aside.

Into a small heat-proof bowl, pour 2 tbsp of cold water. Sprinkle the gelatin over the water. Let it bloom.

Turn the heat to low under the same skillet used for melting the chocolate. In a large heatproof bowl, whisk the egg yolks, ¼ cup sugar, and Marsala until smooth. Set the bowl directly into the skillet with hot (not boiling!) water. Whisk the mixture constantly until thickened and an instant-read thermometer registers 145F for 3 minutes, about 15 minutes total. Remove from the heat. Set the small bowl with gelatin into the same skillet (you can increase the heat now) and stir until the gelatin has dissolved. Add the dissolved gelatin to the egg yolk-Marsala mixture and whisk to combine. With a rubber spatula, gently fold the melted chocolate into the egg yolk mixture. Let stand for about 10 minutes or until cool.

Meanwhile, in a medium bowl, whip ¾ cup of the whipping cream until the soft peaks have formed (don’t overbeat). With a rubber spatula, in 3 additions, gently fold the whipped cream into the chocolate-zabaione mixture.

Spread the zabaione mixture evenly over the cherries, making sure the gaps between the rows of cherries are filled. Brush the cut side of the second génoise layer with ¼ cup of the cherry-soaking liquid, and arrange the cake layer, soaked side down, over the zabaione filling. Press lightly. Cover the cake with plastic wrap and refrigerate at least 4 hours, better-overnight, and up to 24 hours.

To unmold the cake, run a thin knife around the inside edges, then remove the side of the pan. Transfer the cake to a serving platter.

Close to serving time, whip the remaining 1 cup of the whipping cream with icing sugar and vanilla. Spread or pipe the whipped cream over the top of the torta. Lightly dust the top with the cocoa powder. Arrange the fresh cherries on the top and serve.

Cut the cake with a hot dry knife. Dip the blade in the hot water and wipe it dry every time you make a cut.